Málaga County Council is to open El Caminito del Rey path before Easter after having invested 2.24 m euros in it

Ardales, Álora, Antequera and Abdalajís Valley will hand over the management of the infrastructure to the above governmental body until it is put in a public tender.

Elías Bendodo stresses the agreement between the provincial government, the town councils, the Andalusian and Spanish government that made this project real.

The entrance is free but there is to obtain a ticket, and necessary measures will be taken to protect the environment and visitors. 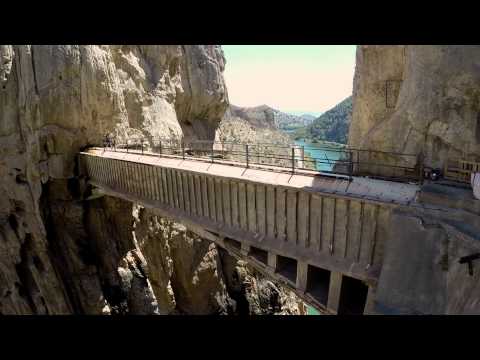 This is how El Caminio del Rey was built

Today, during an extraordinary plenary meeting in El Chorro, County Council President Elîas Bendodo announced that el Caminito del Rey is to be open round Holy Week which is celebrated from 29th March (Palm Sunday) to 5th April (Easter Sunday), after an inversion of 2.24m eurous has been made. The entrance is going to be free although there is to achieve the tickets on a web page.

At the plenary meeting, the management of the construction of this new tourist and environmental infrastructure by the County Council was approved, after the municipalities Ardales, Álora, Antequera and Abdalajîs Valley, which contain parts of the trai,l had handed it over to the County Council. According to this agreement, the provincial body will be in charge of opening the path and its functioning for the first few months.

Mr Bendodo informed that, at the same time, the County Council will work with above towns on preparing the public tender for the future works on the path, and he assured that it will be done as soon as possible. The County Council President said that: ‘El Caminito del Rey is a national and international attraction that improves and completes our tourist offer. Actually, many tour operators have shown their interest for its exploitation.’

The access to the path that is hanging over the gorge Desfiladero de los Gaitanes will be free, as Mr Bendodo stressed, and the visitors will be able to enter and exit from any of its ends thanks to the control points that are placed in Ardales and Álora. Estimated time for crossing the path is three hours, and it is seen as an active tourism activity that requires certain effort.

The refurbishment of El Caminito del Rey path is practically over, as 98% of is done. The County Council not only invested in the trail, but as well in the surroundings. That comes to a total of 5 m euros (2.24 m for the boardwalk and the rest of it for the roads and equipment, as, for example, the repairs on the road Ardales – El Chorro, which is of great importance to the zone).

Moreover, Mr Bendodo reminded that, in October, the County Council handed over to the Andalusian Government the Special Plan of El Caminito del Rey that was agreed with the municipalities, and which plans projects worth 11m euros for tourist and sustainable development of the area.

Then, the president emphasized the need ‘of the involved institutions to fulfil the commitment to reopen the path El Caminito del Rey after 25 years of state of abandon.’ This includes the County Council, the town councils, the Andalusian Regional Government and the Spanish Government. Furthermore, he paid tribute to the deceased representative of the County Council Department for Public Works, Ignacio Mena. The footbridge that links two walls of the gorge is named after him.

The extraordinary plenary meeting was celebrated in the facilities of the company Endesa, at the view point Tajo de la Encantada. The undertaking of the project by the County Council, after the towns of Ardales, Álora, Antequera and Abdalajîs Valley had handed it over, was supported by the political parties PP (People’s Party) and Izquierda Unida (United Left Wing Parties), while the group from PSOE (Socialist Party) abstained.

El Caminito del Rey path will no longer be a solitary attraction, but will be joined with other important active tourism initiatives of the County Council, such as the Great Path and the Costal Path in order to form a product called The Great Challenge (El Gran Desafîo), which is going to be presented at the Fitur Fair, which is starting tomorrow in Madrid and hopes to welcome 2.5m travellers.

The visitors who come to El Caminito del Rey will have to announce their coming on the webpage, and wear a helmet in order to avoid possible landslide that might be produced by animals. Nevertheless, there will be flexible protection wire. The municipalities and the County Council are responsible for the rules of use.

The length of the trail is six kilometres. The length between two access control cabins is 4,350 metres, that is to say, 1,600 metres is the length of the boardwalk above the two gorges, and 2,750 metres goes on paths and roads that passed stabilization or consolidation process.

The refurbishment of the boardwalk of El Caminito del Rey was started on 13th March 2014.The technique which was used for this purpose was similar to the one used between 1901 and 1905 by the employees of the Hydroelectric Power Company El Chorro to build the boardwalk. The workers have to hang of the rock so they would be able to place wooden parts and connect them to the wall.

The company Sando, which was awarded the works, uses helicopters to move materials to areas with difficult access, and to take away rubble and rubbish from the building spot.

The hanging part of the trail is going to be made of wooden parts and moorings fixed onto the rock. Some sections will have glass floor so the visitors could see the gorge and the old boardwalk, which remains there as architectural heritage.